What happens when you’re hosting a 3-day polymer clay event, expecting teachers and students from around the world, and the world shuts down because of a pandemic? Polymania is an annual polymer clay workshop held in Bristol, England each year, with three instructors and over 60 students. It normally goes off without a hitch. But this year things got — complicated. Here is how the incredible organizer, Cara Jane Hayman, rearranged and recreated the entire event to become a virtual workshop with only a few days’ notice. To add to the topsy-turvy chaos, both Cara Jane and Donna Kato had just returned from teaching at Nordic Poly Camp in Sweden the week before (which also had to go virtual when the shutdowns were announced the day before and a third of the students could not travel.) What a testament to the ingenuity, cooperation and yes, community of the people in our polymer clay world! The teachers this year were Donna Kato, Sarah Shriver, and Bettina Welker. None could travel to Bristol to teach the workshops. But that didn’t stop anyone. Here’s a report from Noortje Kuhlman.

A clay retreat like never before! Just 2 days before the Polymania would start it became clear that no teacher would be able to be there in person. Sarah Shriver wasn’t allowed to leave California, Bettina Welker was forced to stay at home in Germany and Donna Kato was just so lucky she could make it back to the States after a six week teaching tour. People from all over the world travel to Polymania. But, due to COVID-19, people from Spain, Belgium, Rumania and the Netherlands were forced to stay home as well.

So in a split second all kinds of arrangements had to be made. The hotel had to be asked to change the dates (and change all the booked rooms to the new date!). Goody bags, including the clay, had to be sent to the participants. Handouts and material list to be printed by the students at home. Tutors had to think of how to teach online…now that’s a challenge!

Bettina started off on Friday morning. Time difference between Germany and the UK is just one hour. Most students managed to get online in time. There is a small time gap between the recording and the questions/responses typed in by the students. All questions were looked after during a break. It’s impossible to teach and answer questions at the same time. First lesson learned: don’t make Facebook Live too long. After a while there’s some hiccups so better pause in between. We were lucky Christopher (Bettina’s husband) was there to look after the technical part. Just as it would be in “normal” Polymania, students went to work the showed part during the break. The results at the end of the day were phenomenal! At least 60 different necklaces. Great start‼ 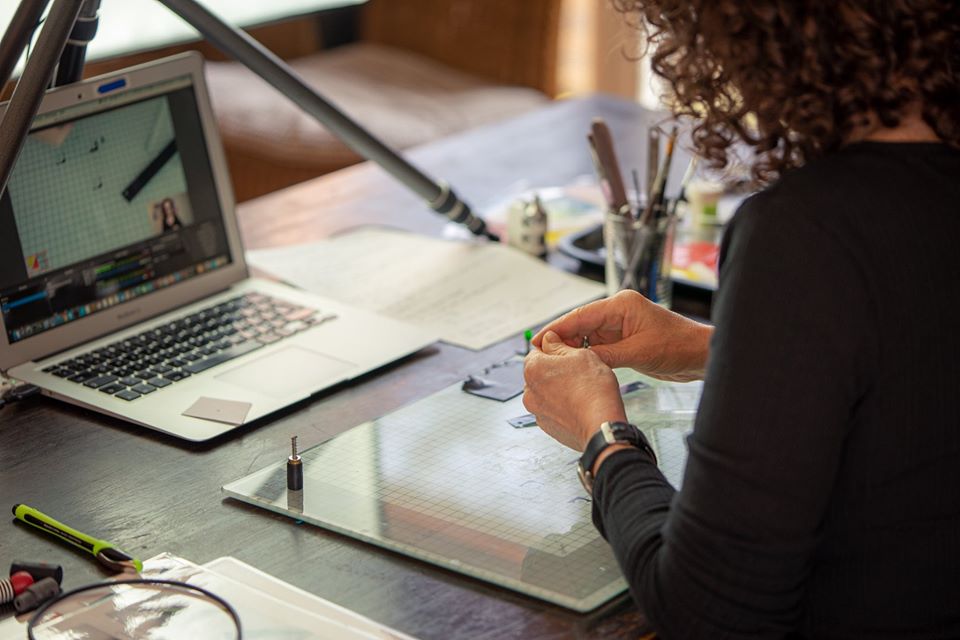 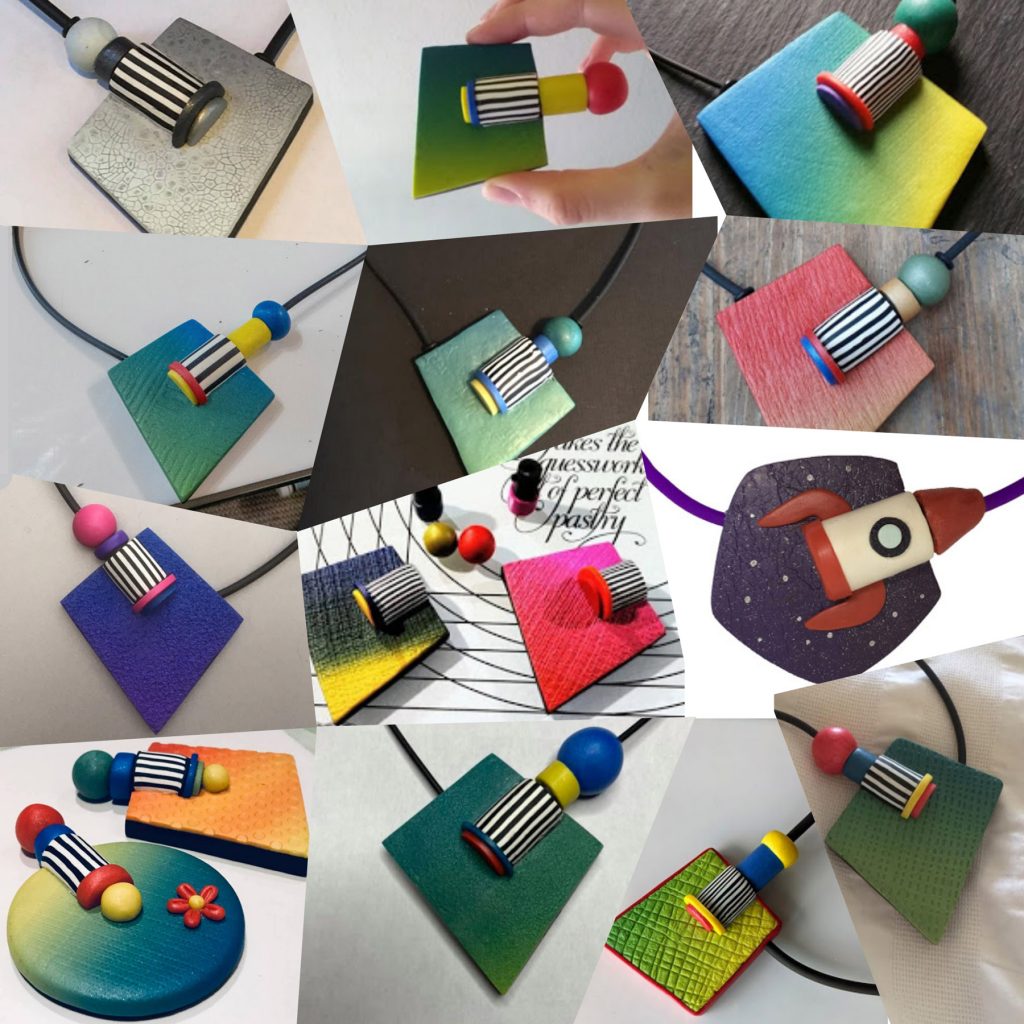 As there’s a major time difference between California and the UK, Sarah Shriver started at 5 a.m., which was noon in the UK. What a dedication! It’s the middle of the night, but Sarah just looks fabulous. It must’ve something to do with being weekend and the whole world using the internet cause the first Facebook live just wouldn’t show for many of the students. Luckily all videos are recorded to be broadcasted afterwards as well. If you ever want to know how to make a complicated cane in an easy way you should take a workshop with Sarah. Every step, including the wrong ones, are carefully mastered. No wonder everybody had a great cane to play with at the end of the day! 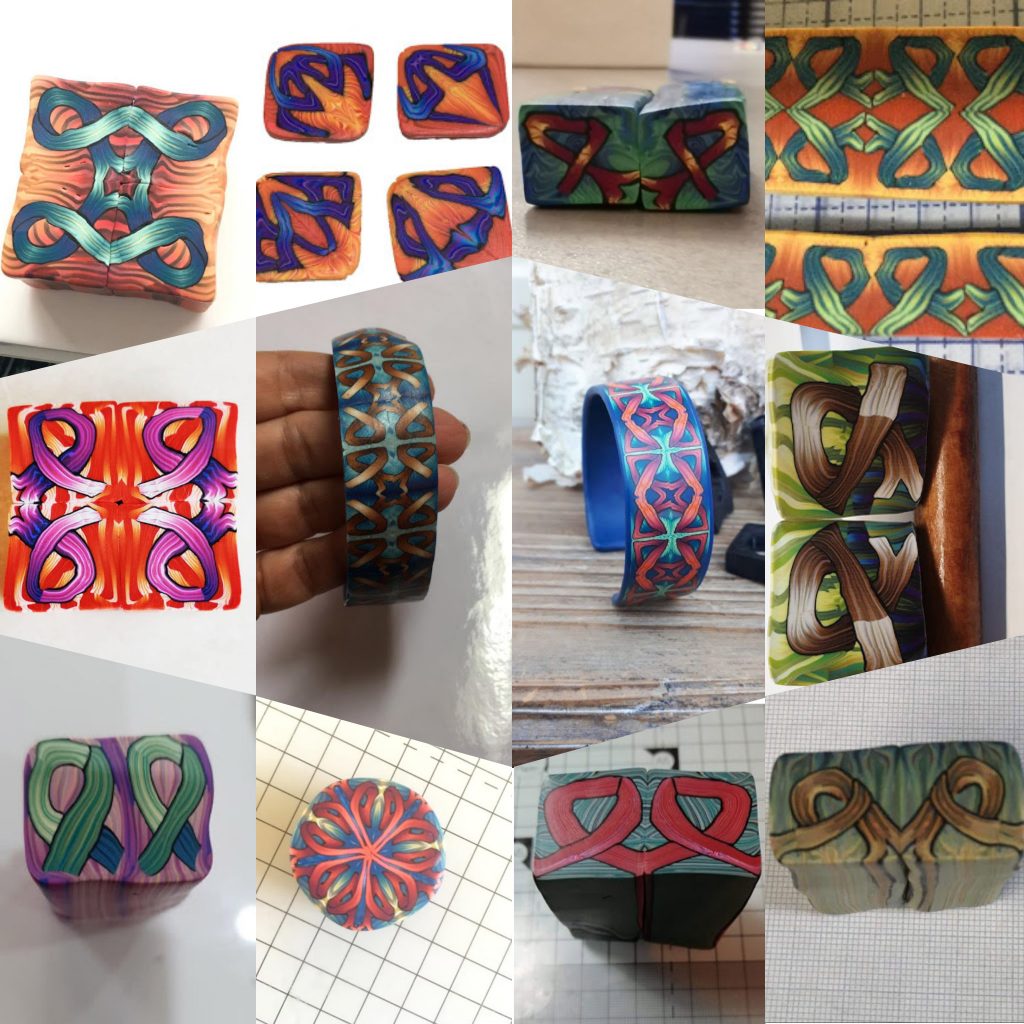 Sunday morning, 5:30 in Colorado, Donna Kato is eager to start the day! We’ve seen Donna trying her set-up in the past few days, now she’s ready to go. Louis the dog is in for a visit, inspection of the rings to be made. 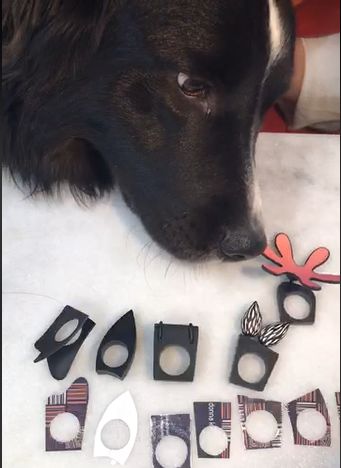 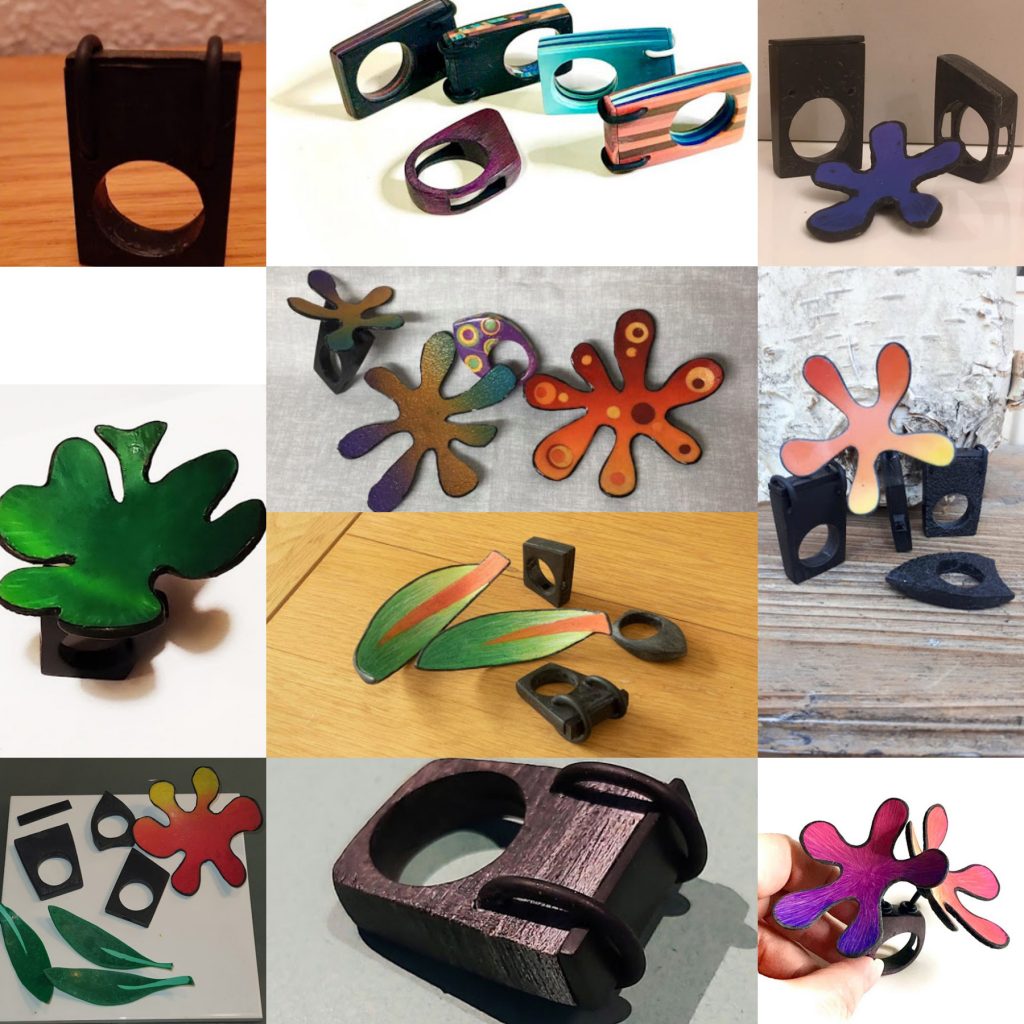 At 6 sharp Donna starts her workshop. It’s noon in the UK. Students are ready for the show. Donna just doesn’t know when to stop — during the breaks she tells loads of interesting information. Good to know it’s recorded so if you were working there’s a chance to catch up. We were supposed to make 2 rings — with all the knowledge of this day everybody’s queen of rings now. There are so many possibilities. Some extra techniques, air conditioning and imagination — Another awesome workshop ended this year’s Polymania. But the end? No! There will be a retreat at the end of October. A get-together for everybody to catch up, play with clay! Thanks to everybody who made this work! 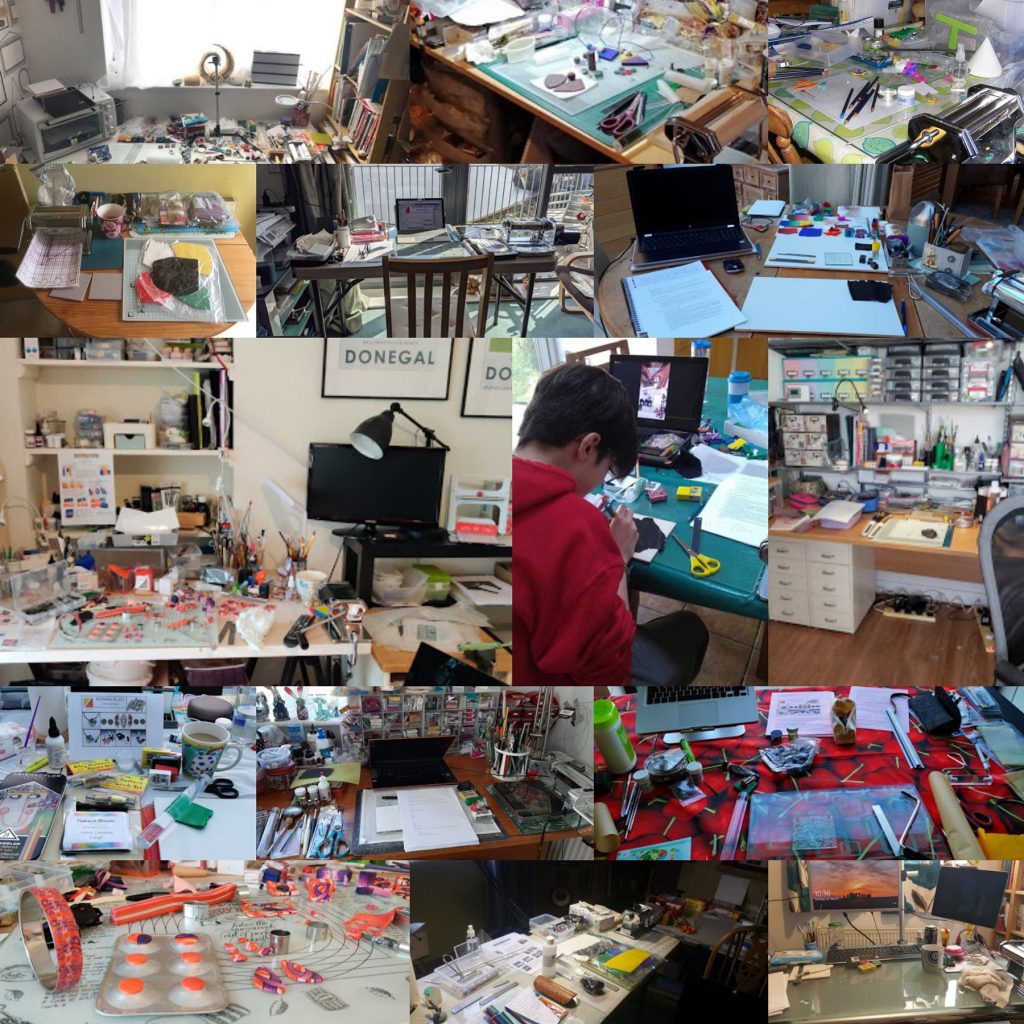 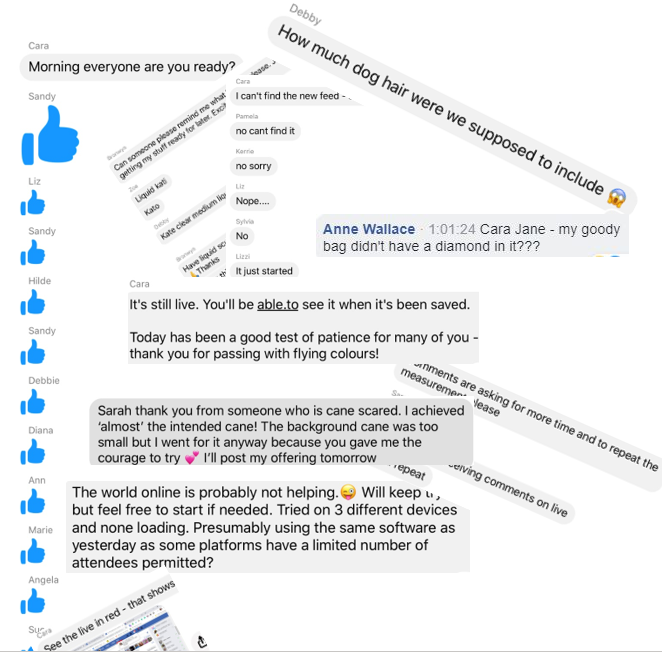 Use the buttons below to share this post on your social media so your friends can love it, too.

Sign up to get emails that summarize what’s new on Polymer Clay Love.