I always imagine Jon Burgess as somewhat of an eccentric tinker who putters around in his workshop, making fantastical creations from the various bits and bobs that he gathers and which accumulate in the corners of the room. I was amused to see these pictures and find that I was correct. Jon’s primary tinkering medium, however, is polymer clay. He makes the most wonderfully unique, rustic, and sometimes downright odd beads from our beloved polymer clay and often including found objects that he modifies to fit the designs. Get to know Jon in this delightful interview below. I think you’ll find him as charming as his creative bead designs. – Ginger 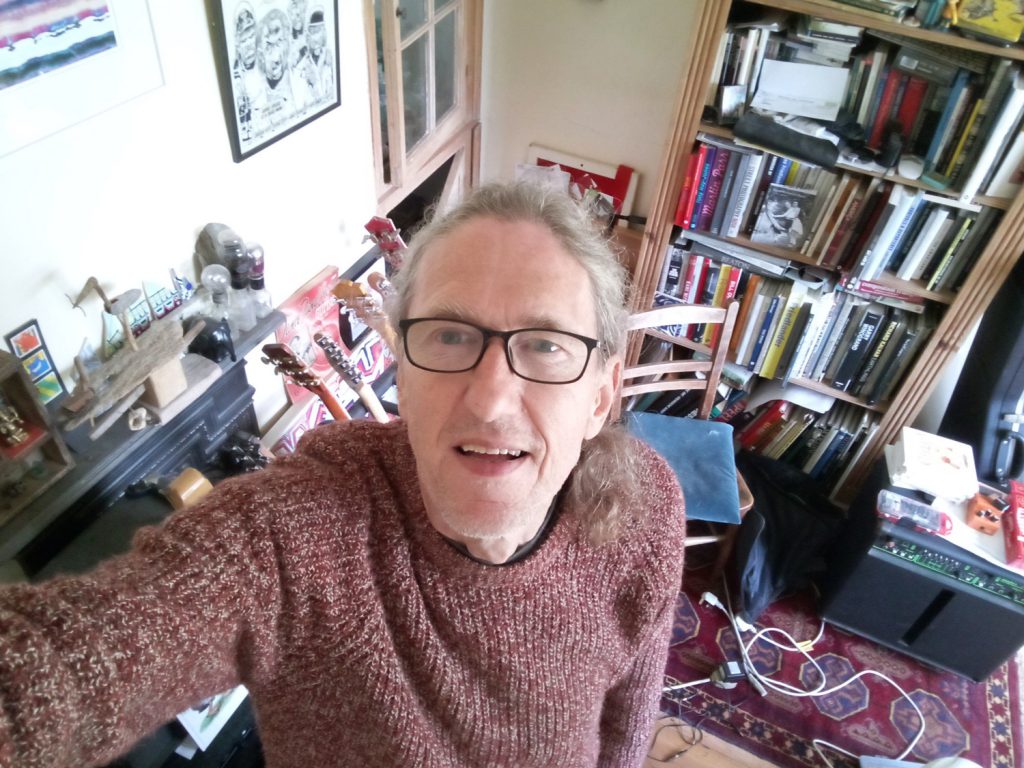 Q When you meet strangers who are unfamiliar with your work, how do you describe what you make?

A I mostly make what could be loosely described as “Rustic”, “Primitive” or “Organic” beads, charms and pendants. Pieces that look as though they might have come from some ancient culture, but you are not sure from which planet . . . I like working somewhere between between ancient and modern, where aspects of both combine and collide. I also like the way that allowing or indulging happy accidents, and the way that trusting your instinct, can lead to interesting places. Sometimes to blind alleys, but blind alleys can be interesting if you know what to look for 😉
As for describing it to strangers, this doesn’t happen much, as my work is not ‘out there’ in the Real World very often. But I did write a short explanatory piece to accompany my work when my wife and I participated in South Norfolk Open Studios a year or two ago, which might give some insight.

“My work involves utilising textures and images, transferred or impressed into polymer clay, to make unique and unusual beads and jewellery. Exploration, experimentation and following the fascination are the guiding principles of my practice. I use many techniques in my work, such as image transfer, texture making, faux ceramic, crackle glaze effect, turned effect, and directly distressing the surface. I have also developed surface treatments to make my beads seem to be ancient, although actually being entirely modern. An apparent contradiction I also find fascinating.” 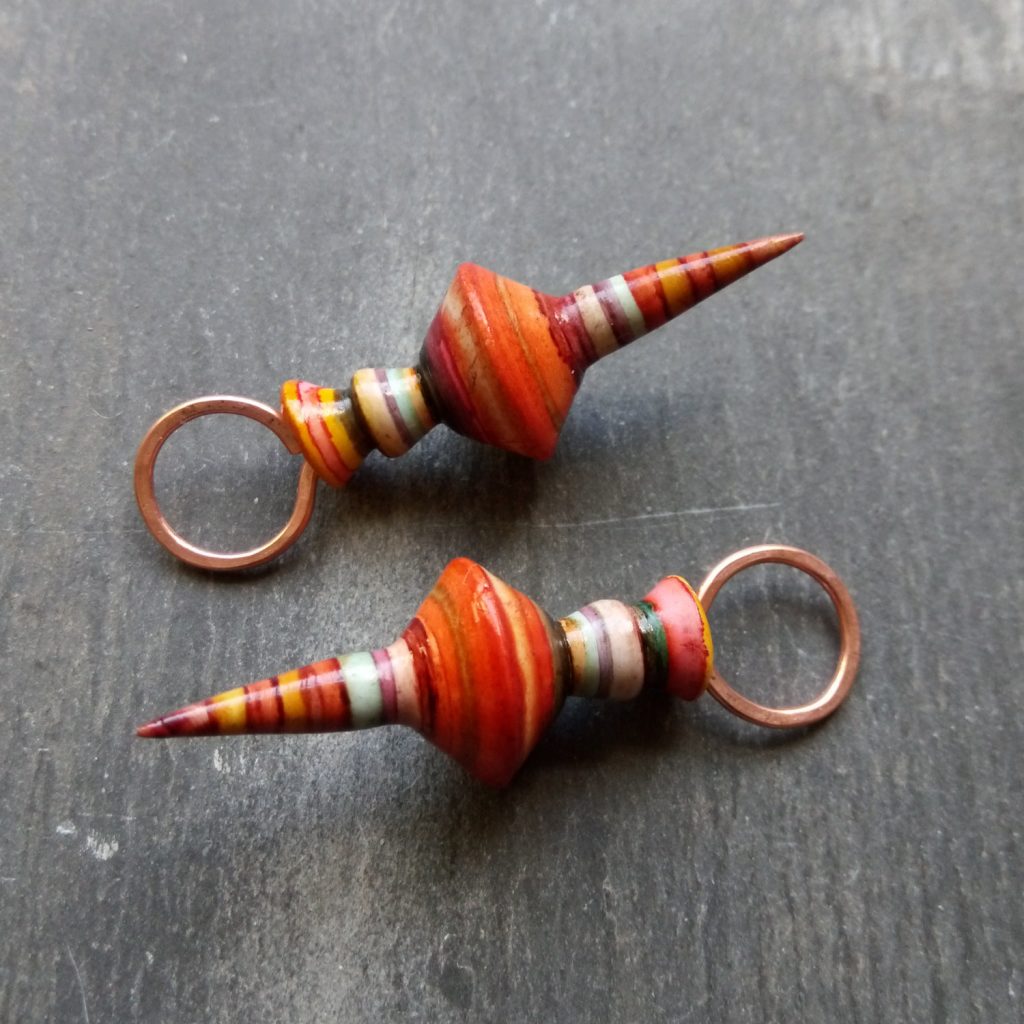 Q What is your background, career-wise, and how did you end up working with polymer clay?

A My background is illustration and writing, in the children’s book field. I was successful and have had books translated and published in many countries, under my ‘real’ name. Burgess is my middle name.

All good things come to an end, and when it became evident that my style was not flavor of the year, rather than continually exposing myself to the constant emotional attrition that is repeated rejection, I decided that after thirty or so years, enough was enough.

As for how I ended up working with polymer clay, looking back it seems utterly random. I don’t remember what triggered my interest. I do know that one of the attractions was that it wasn’t expensive and that I already had a pasta machine! I also liked the idea of working with my hands on something malleable rather than staring at a screen or a sheet of artboard.

I joined an online forum to get advice and share work, bought some Sculpey lll (I know!. . .) some alcohol inks and gilders paste, and I messed around. After a while I wondered if I could maybe sell any of the things I was making, as I quite liked how they were turning out and the reaction on the forum was good. So I opened an Etsy shop. Some things actually sold, so encouraged by the good feedback and the affirmation that having someone fork out their hard earned cash for something you created brings, I carried on.

“I discovered that many artists use polymer clay to make beads, which led me to explore beads as cultural phenomena and as art objects in their own right. And to realise how very ancient beads are in the history of human creative endeavor. Personal adornment has a long history. This was all new to me, and I found it fascinating.” 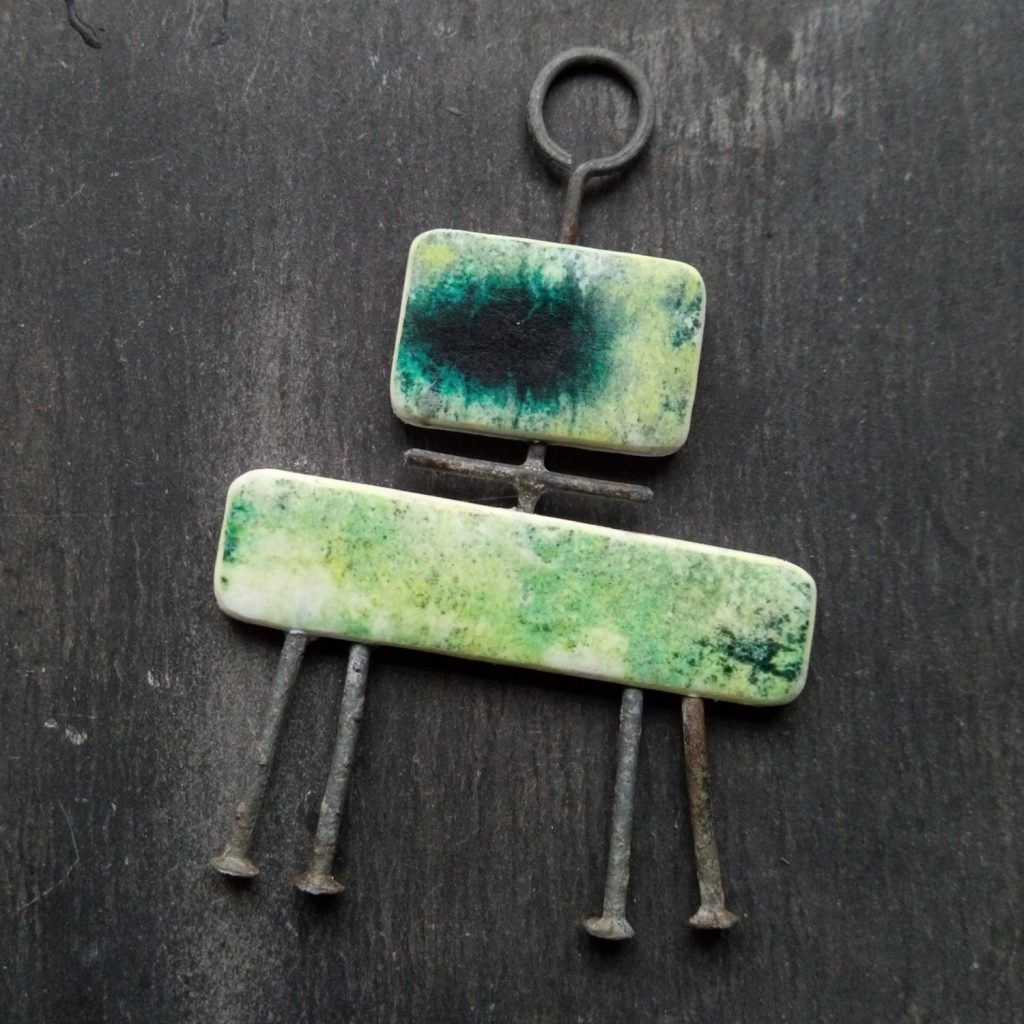 Q Where do you live, and do you think that it influences your artwork or creativity?

A We live in rural South Norfolk, UK. Being out in the country with no aircraft overhead, very little traffic and with cats, chickens, geese and guinea fowl pottering about does wonders for the soul but has little bearing on my creative output. True, I am using objects and bits of wire that were around the place when we moved in, (three years ago) but I would be using found objects wherever I was located. 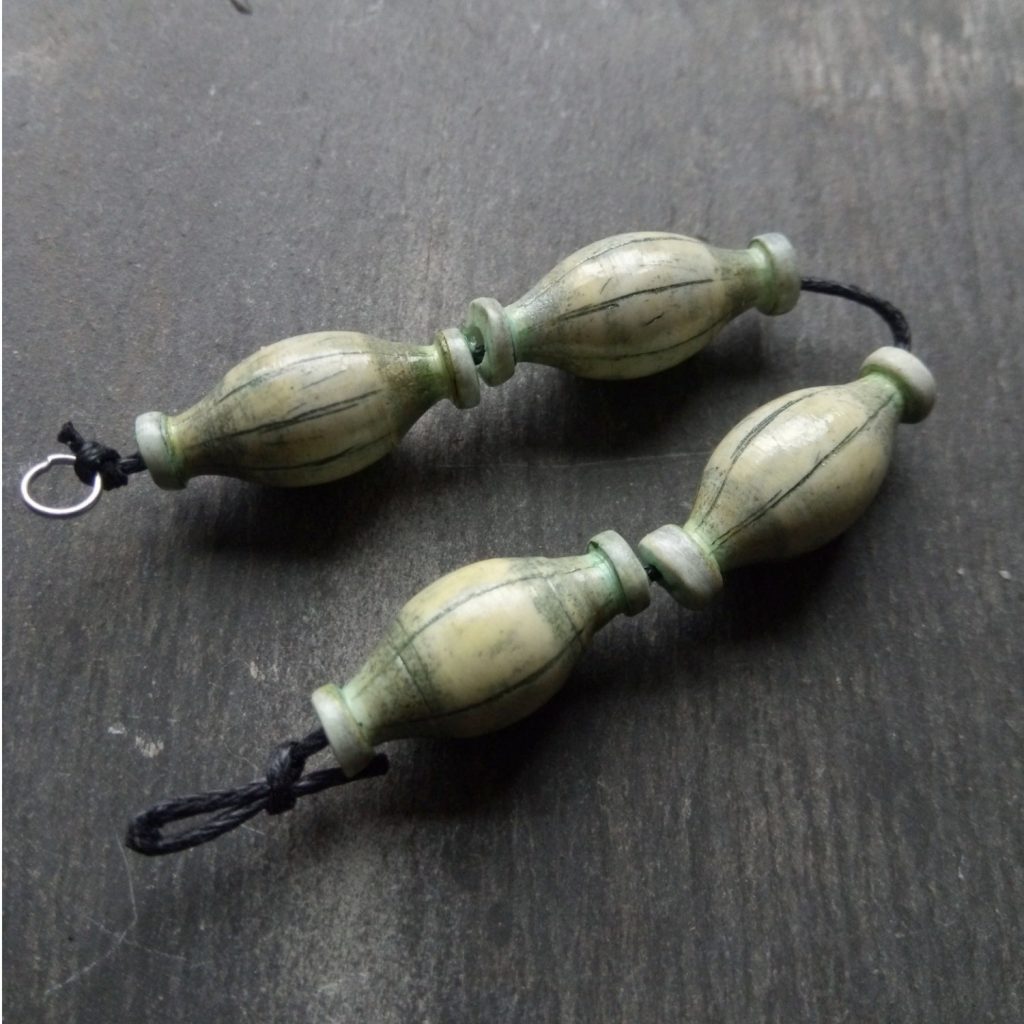 Q Do you have a dedicated studio?

A I have a smallish workshop, which contains my work desk, and which also doubles as a DIY workspace, tool store and suchlike, so is far from immaculate. . . I also have a studio/office, which houses my computer, books, packaging materials and several guitars. 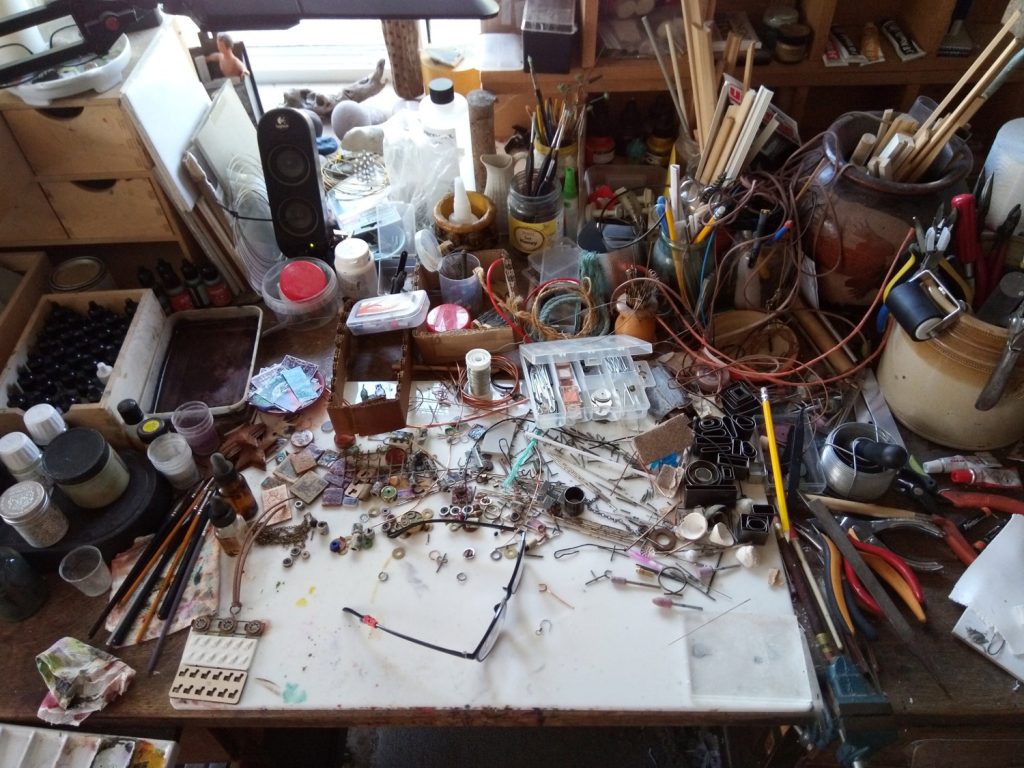 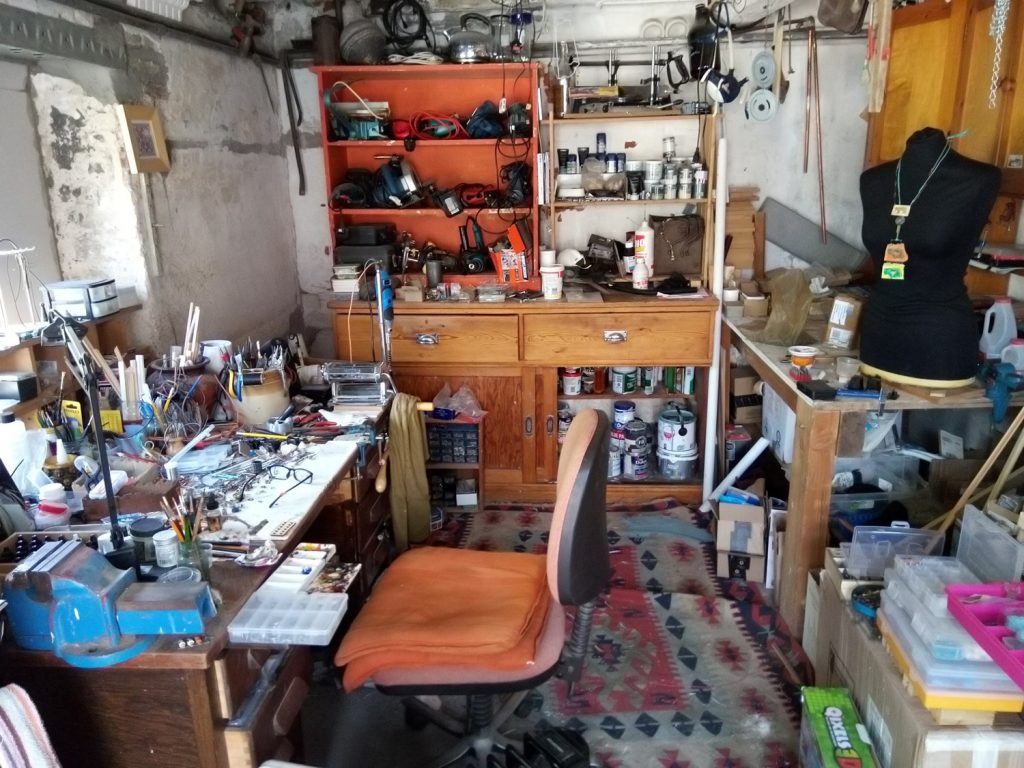 Q You blog at Following the Fascination. What drives you to write and who would you say is your typical reader?

A Not sure. It may be because I like the sound of my own voice. But seriously folks, I enjoy writing and find it very useful when I want to clarify an idea or ideas. I don’t blog as often as I think I should, but try to write something (and post photos of recent work) every three or four weeks, or longer. Things seem to be slipping a bit on the blog front.

My typical readers are my regular contacts on FB and Instagram, who tend to be from the USA and the UK, but looking at my stats I find that there are a few readers from countries like Russia and the Far East etc. 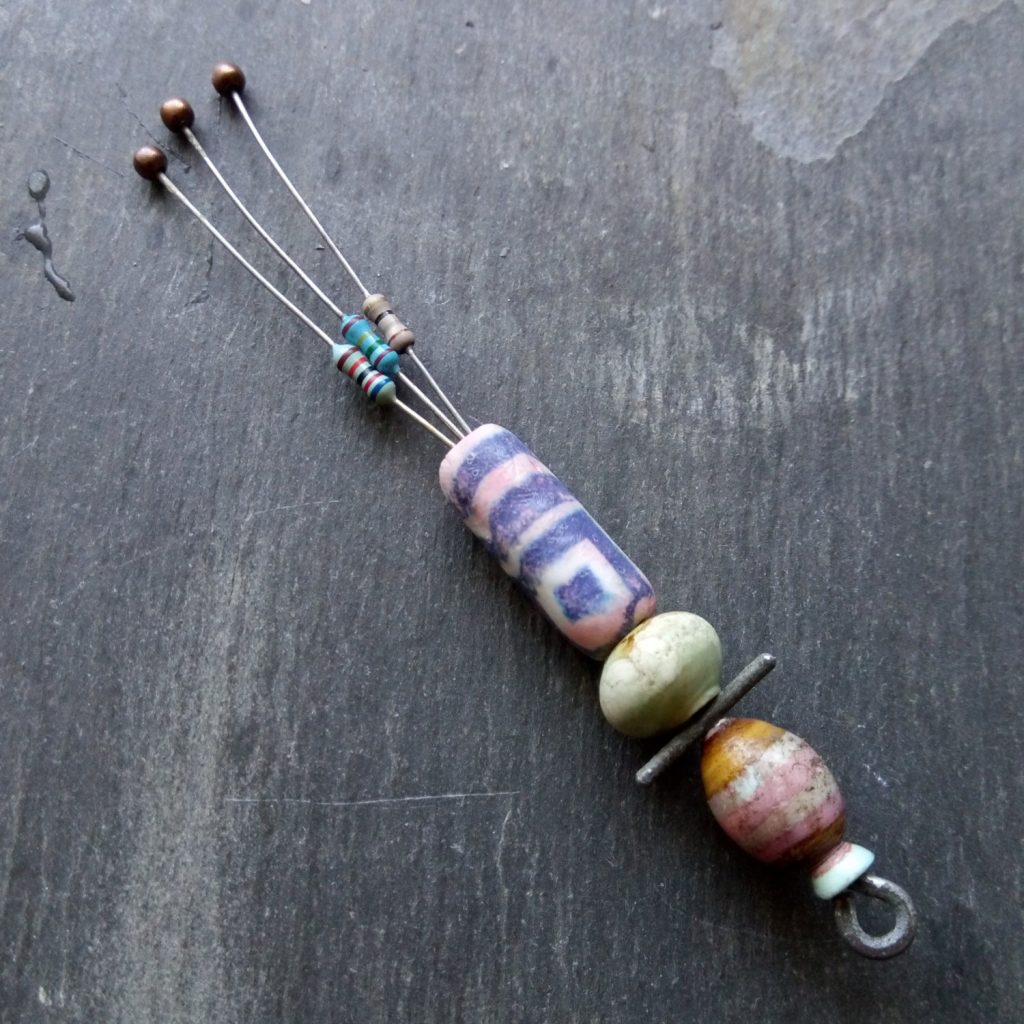 Q What do you do when you’re not making beads?

Gardening, cooking, DIY, rummaging in Charity Shops and related places, playing bass in a local covers band. (I’ve played bass for around 45 years I am shocked to realize!)

Though in this surreal time of Lockdown due to the Coronavirus, the bass playing and charity shop rummaging is out for quite a while. Luckily we are in an ideal place to be locked down, unlike many who are finding it tough. May we all get through as unscathed as possible. 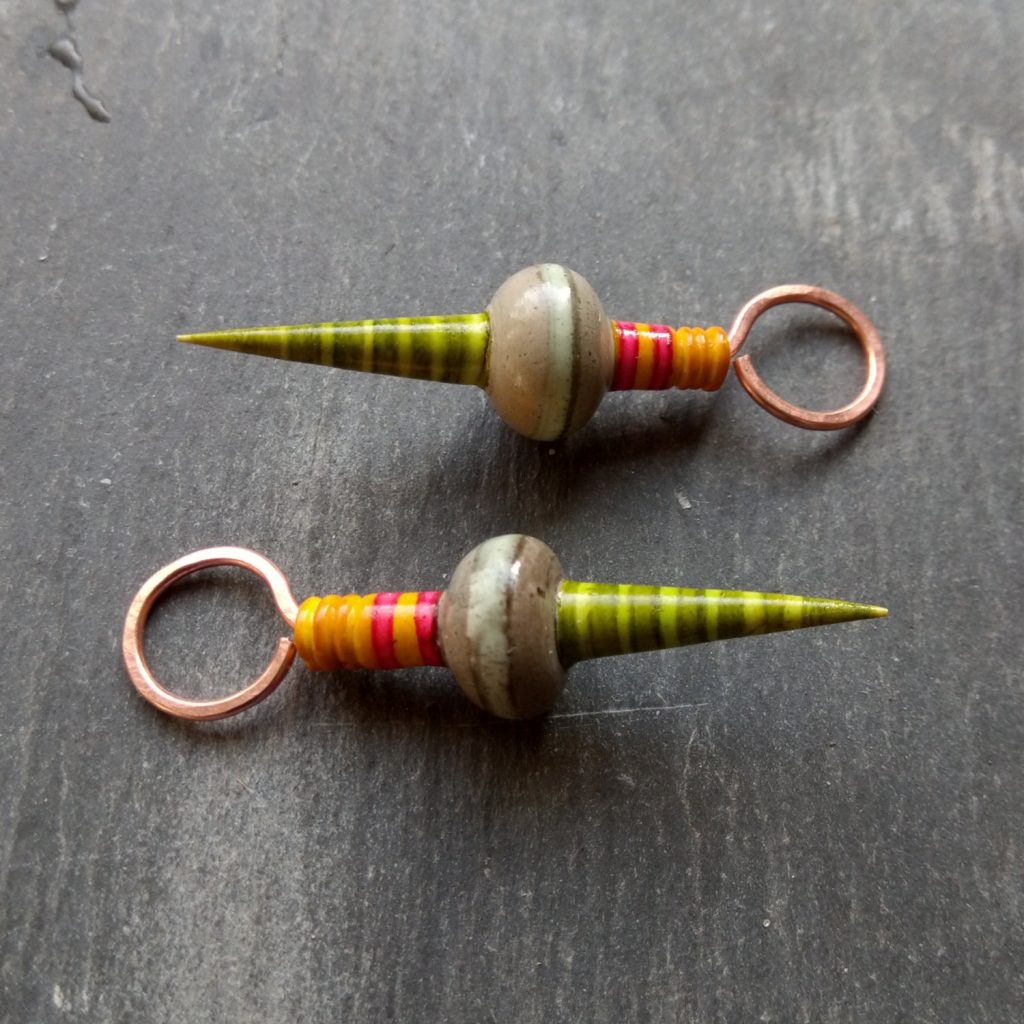 Q Do you also make jewelry with your beads?

I make some jewellery, but haven’t found the right groove, if that makes sense. I rarely put it up for sale and just as rarely sell any 😉

Personally, I need it to be more than hanging my work on an ear wire or a string, though that can work well and is a perfectly fine thing to do. I feel that I haven’t progressed as far creatively as a potential jeweller as I have as a bead and charm maker. I need to marry the two better. As a 63 year old straight man, I am not experienced at wearing jewellery, and am not in hurry to gain that experience, so have a lot to learn. My wife wears small, pretty stuff so is not interested in being a model/guinea pig, and my daughter, who might have been persuaded to try, lives in London. I do have Ethel, my polystyrene dressmaker’s dummy I liberated from the local dump. . .

Q What do you love the most about polymer clay?

It’s fascinating stuff – As you no doubt know, technically it’s a modern, plastic modeling medium with many clay like properties. It is malleable until baked (at domestic oven temperatures), whereupon it becomes hard and tough. It can be painted, sculpted, glued and distressed in various ways. No specialist equipment is required, and it’s also relatively cheap which makes it less intimidating to experiment with.

What I find interesting is that it has little identity of it’s own, possibly due to it’s newness as a medium. This lack of clear identity, its transparency if you like, means it is can be made to impersonate other materials, but produce forms that those materials might not be able to. 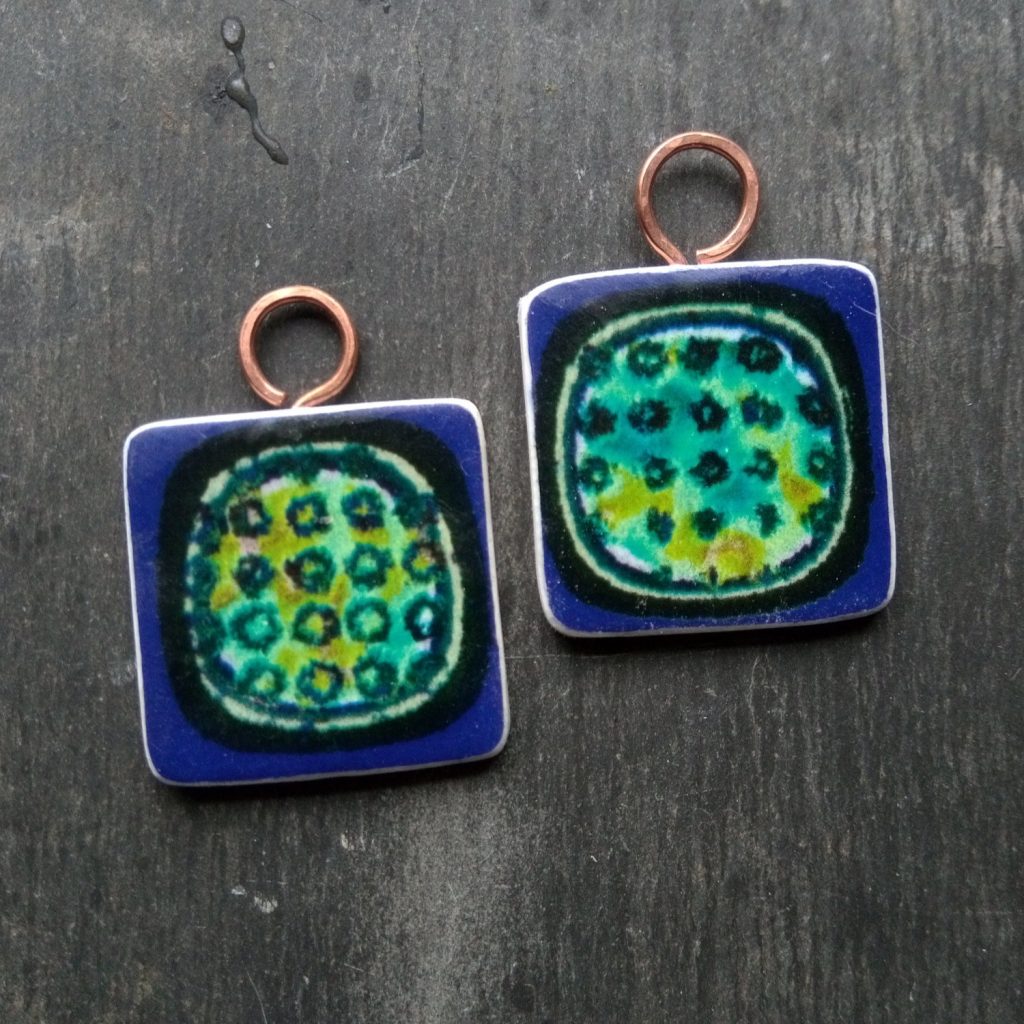 Q What are some of the things you’ve tried that failed miserably?

A Making cider, but I will persevere. We have a few old apple trees, some of which were almost certainly cider apples as they are somewhat bitter even when fully ripe. (Cider was traditionally made where we are.) And what else can you do with 100 or so huge Bramleys (cooking apples)?
I also failed at making any impact on the music industry in a couple of bands I was in. Still, we tried. This failure is something I am quite thankful for in retrospect, seeing what a dodgy industry it is. Sour grapes anyone? 😉

Q You tend to create quite unusual beads. What drives this?

A I do seem to have a strong drive to be ‘original’, or at least to be thought of as original, for better or for worse. This has led me to go my own way creatively. I think creativity should be a playful thing. Play and imagination are hugely important in life and are often undervalued. The more unusual beads I make are often the result of trying things out to see what happens, coupled with having a strong sense of when something ‘works’ without needing to overthink it all. Probably. . . 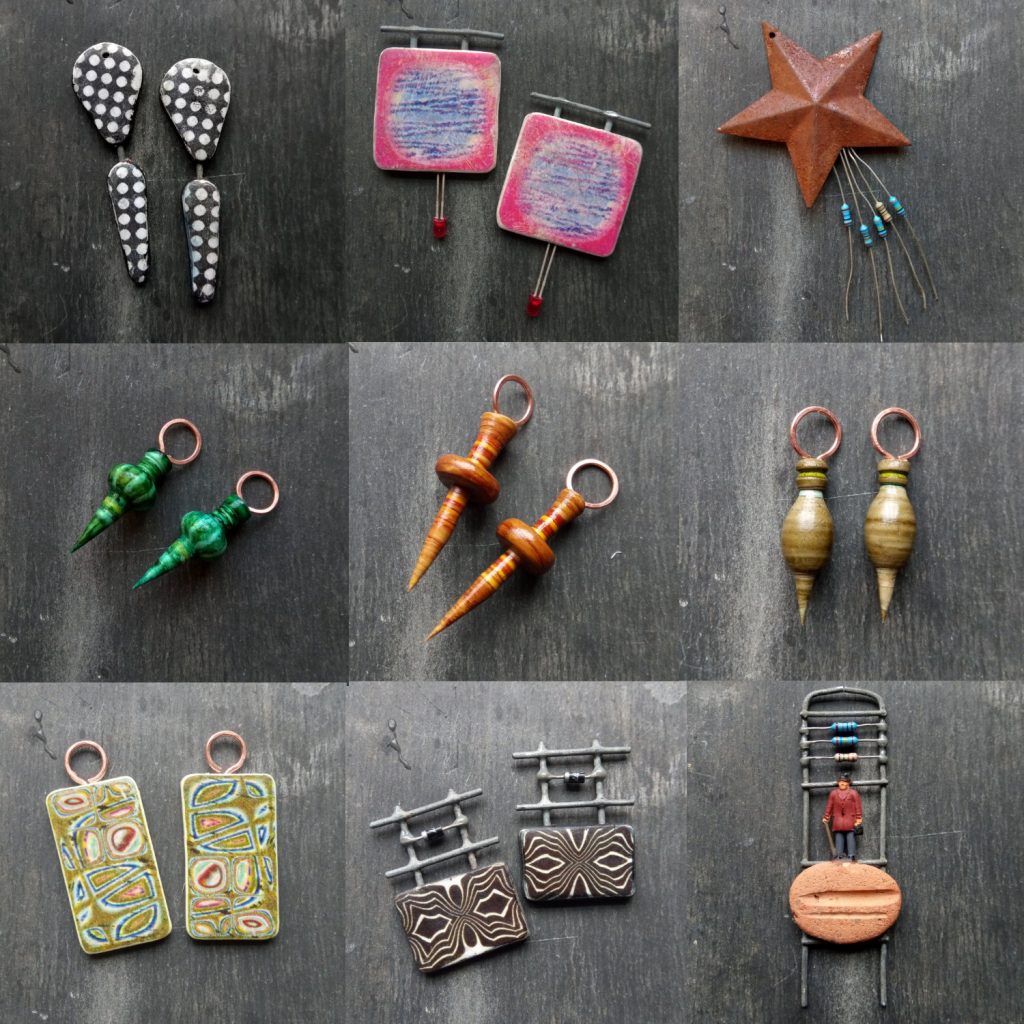 Q Your beads are quite sculptural. Have you considered sculpting larger objects?

A I like working small. Larger pieces would be making too much of a statement. A whole different ball game. I would also be intimidated by the cost of materials, I think. Not going there. Though small pieces that aren’t jewellery are interesting. I make pendants that are assemblage pieces, which could work in small frames. 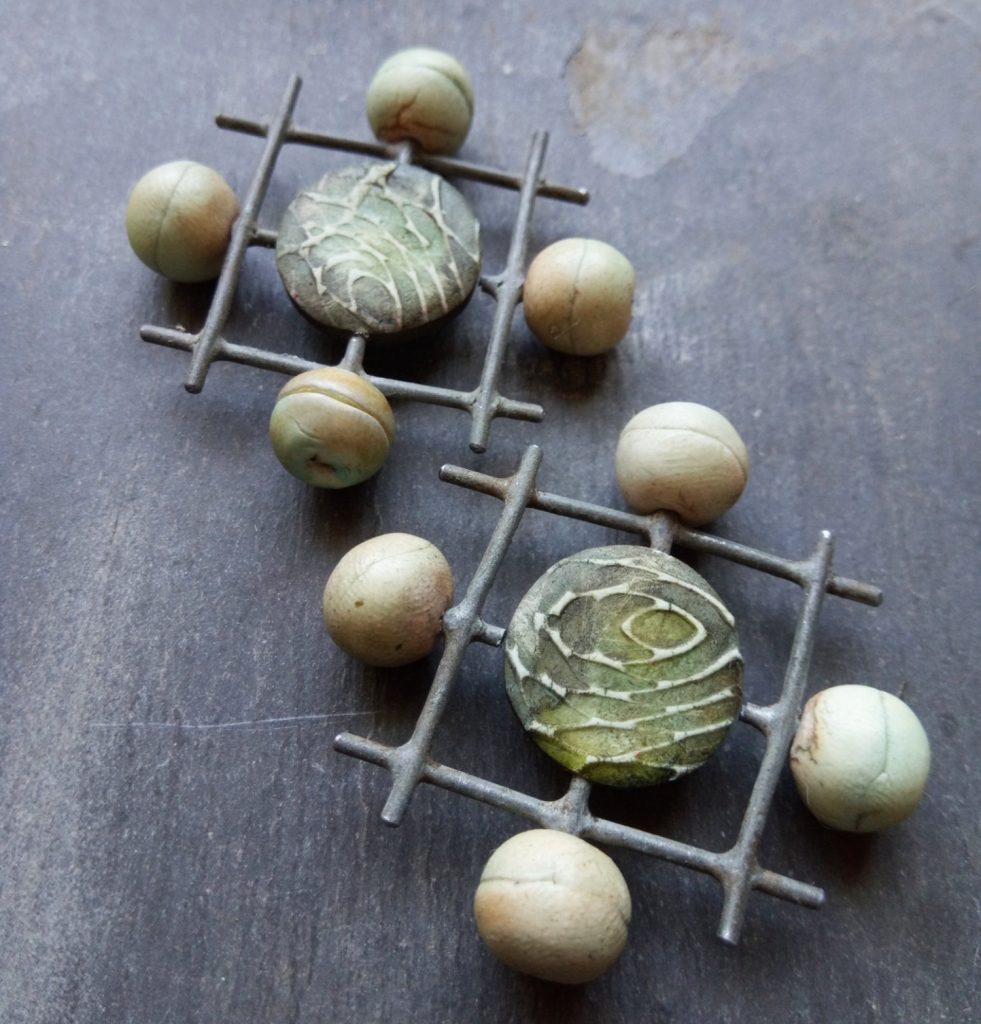 Q Where do you sell your beads and how can people purchase them?

I sell on Facebook, in a group called LBA Designer’s Galleria & Marketplace, on Tuesday and Thursday evenings (UK time)

I have a long established Etsy shop called JBDRusticOrganic.

And have a modest new website which might well have a small shop of sorts of it’s own by the time you read this. https://jonburgessdesign.com/ 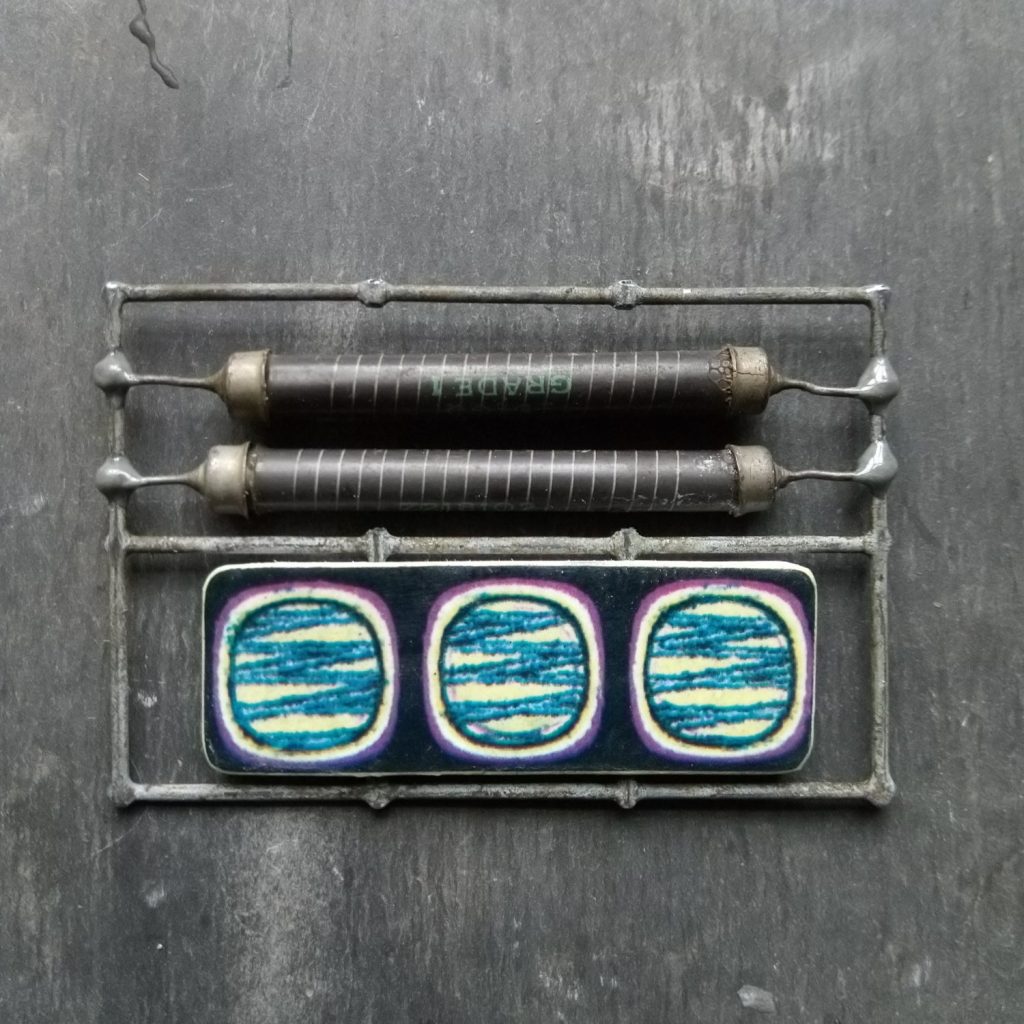 Q Do you take custom orders?

A I do. I am quite often asked to make Made To Order beads and charms to match ones already sold. This is not always possible but I quite enjoy the challenge of matching something I made previously, especially when I can’t remember what I did to make the thing I am trying to copy. . 😉 I’d rather be making new stuff however. 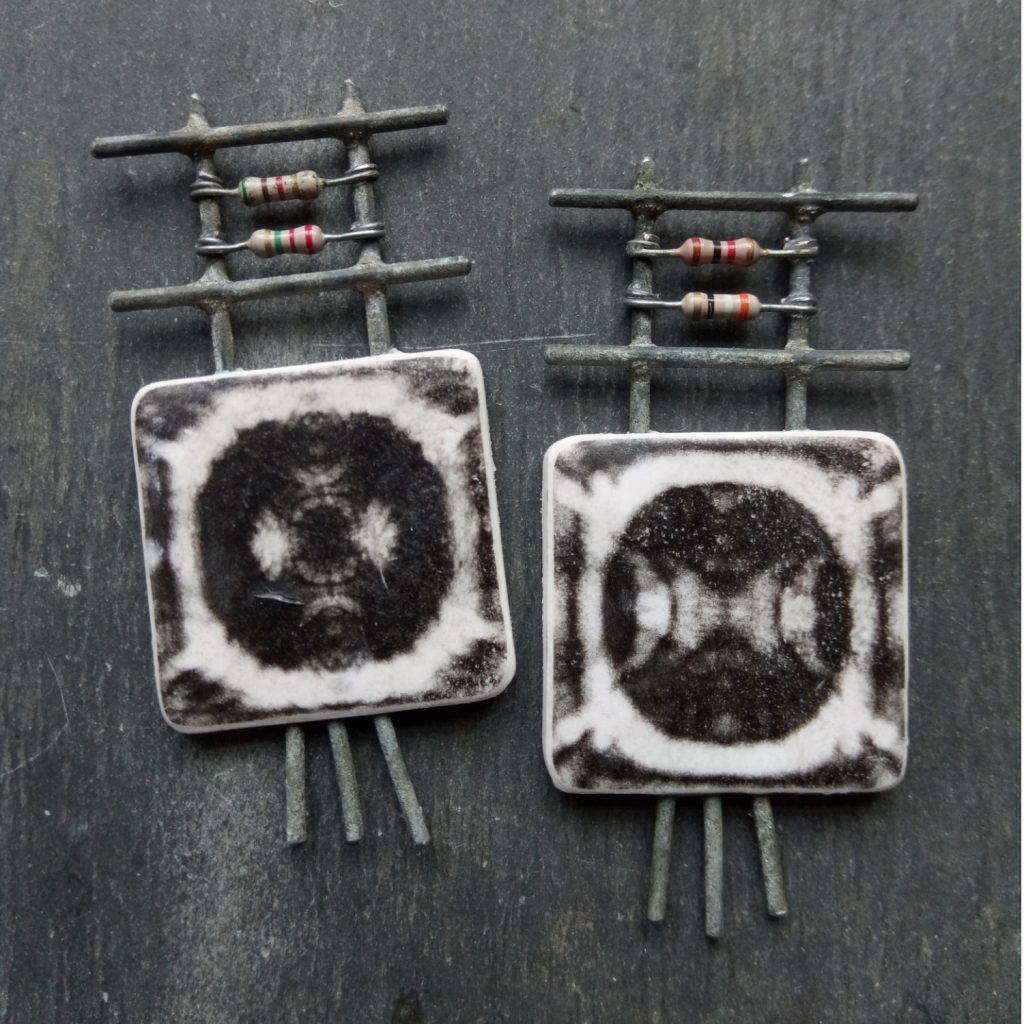 What is your favorite part about what you do?

A That I can explore ideas in a relatively unpressured way, and interact with others who do the same thing, or are interested in my work. I also like a bit of affirmation 😉 I don’t know if I would still make things if I couldn’t share images and get feedback, and if I couldn’t be rewarded by selling some pieces from time to time. 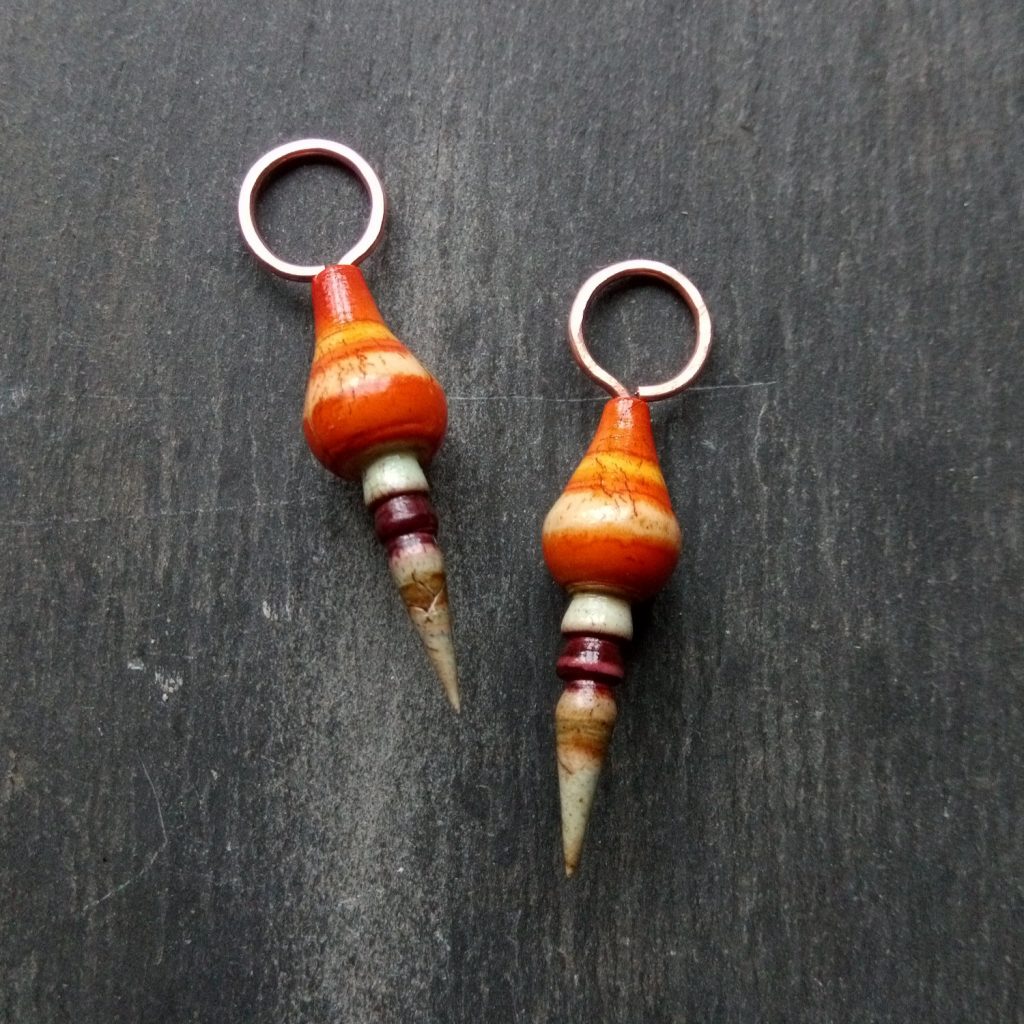 Give Jon Some Love

What do you love about Jon’s work? Tell him! Every artist needs encouragement.

Use the buttons below to share this post on your social media so your friends can love it, too.

Sign up to get emails that summarize what’s new on Polymer Clay Love.